Vagisil, Real Housewives and The Problem With Febreezing Your Fanny 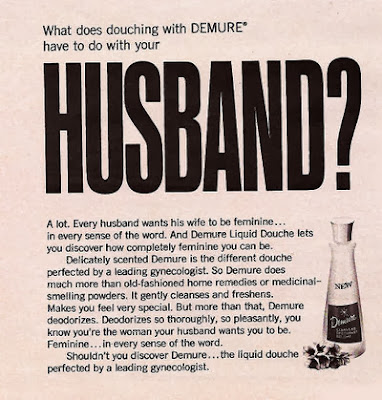 My vagina stinks. Or at least, that’s what my TV keeps telling me. Every time I’ve settled down to catch up on TOWIE (ahem) lately, a cartoon woman hiding behind a pot plant tells me that my vagina is one gigantic stinking sweat gland. But it’s OK - don’t panic! Because for just over a fiver, I can restore my dignity with Vagisil. Its “light and clean scent” will destinkify my muff so that unlike pot plant lady, I don’t have to hide away. This is one sure-fire way to protect myself from a co-worker announcing to the media how I couldn’t keep my partner because my “pussy stinks”.

Vagisil sell a whole range of products to keep our “intimate areas” smelling sweet: wipes, powders, sprays, creams…They even have their own gynaecologist, Dr Adelaide Nardone, paid to imply in carefully worded videos that these products have something to do with vaginal health. All they need now is Britney or J.Lo to bring out their own pussy perfume and we’re away. Muff musk, anyone?

Dr Nardone’s been caught out plying Vagisil’s wares in the past on a Fox segment ingeniously titled “Is your vagina depressed?” without making it clear to viewers that she’s paid by the company. And her seduction recommendations in 1999’s Growing Younger: Breakthrough Age-Defying Secrets for Women should give you an idea of what side of the feminism fence she’s sitting on: “put on a party dress or a teddy…even if it is just you and your husband, put on something nice. You’ll feel like a woman.” Well, I don’t know about you but me, my stinky vagina, and my holey PJs feel womanly already, Adelaide, ta very much.

It’s notable that Vagisil is “proud to support” the Half the Sky Movement which aims to end the oppression of women and girls. It “takes on tough topics like FGM”. All very laudable - until you wrap it up in Vagisil’s mission “to improve the intimate health of women everywhere”, at which point I start to feel more nauseated than someone getting up close and personal with my unperfumed fanny. Do I feel 100% comfortable about a company that inculcates anxieties and encourages women to judge themselves based on the activity of genital sweat glands leading the way on ending female oppression? “May every woman know she is valued, she is important, and she is worthy of respect,” says their Half the Sky promo video. Y’know, so long as she buys pussy cleaner.

The Real Women section of Vagisil’s website gives this delightful endorsement from Brandi, 28: “I love the Vagisil Odour Shield Wash because it's important to me to have something that's going to last all day long. I don't want to be worried that I need to take a shower when I just want to plop down on my couch and hang out with my guy. With Vagisil Wash I feel like I have an added layer of protection there that I don't normally have.”

But the thing is, Brandi, I think our tastes in men must differ quite a bit. Because, while we’re doing sexism, I like a bit of cave in my man – you know, a boyfriend who’s not afraid to get his face right up in the pungent lap of life. Maybe instead of spending your hard-earned cash on this crap, you might want to look for a man who’s not afraid of a bit of pussy perfume au naturel. I’ll leave the last word to Vagisil: 'If you have a question, comment or even a compliment for our team, you can always email us at office@combe.co.uk.'